Every generation has a legend

The end is near. We’re just two months away from Star Wars: The Rise of Skywalker and the conclusion of the Skywalker saga after nine movies and a staggering 42 years of moviemaking.

If our excitement wasn’t already at dangerously high levels, then the arrival of the final The Rise of Skywalker trailer has us primed to explode like a conveniently-placed exhaust port when it’s been bulls-eyed by a couple of proton torpedoes.

Across two minutes and twenty seconds, we’re spoiled with a variety of hints about how the final instalment will pan out – although some are arguably more subtle than others.

On that note, here’s everything we learned from the latest Star Wars: The Rise of Skywalker trailer. 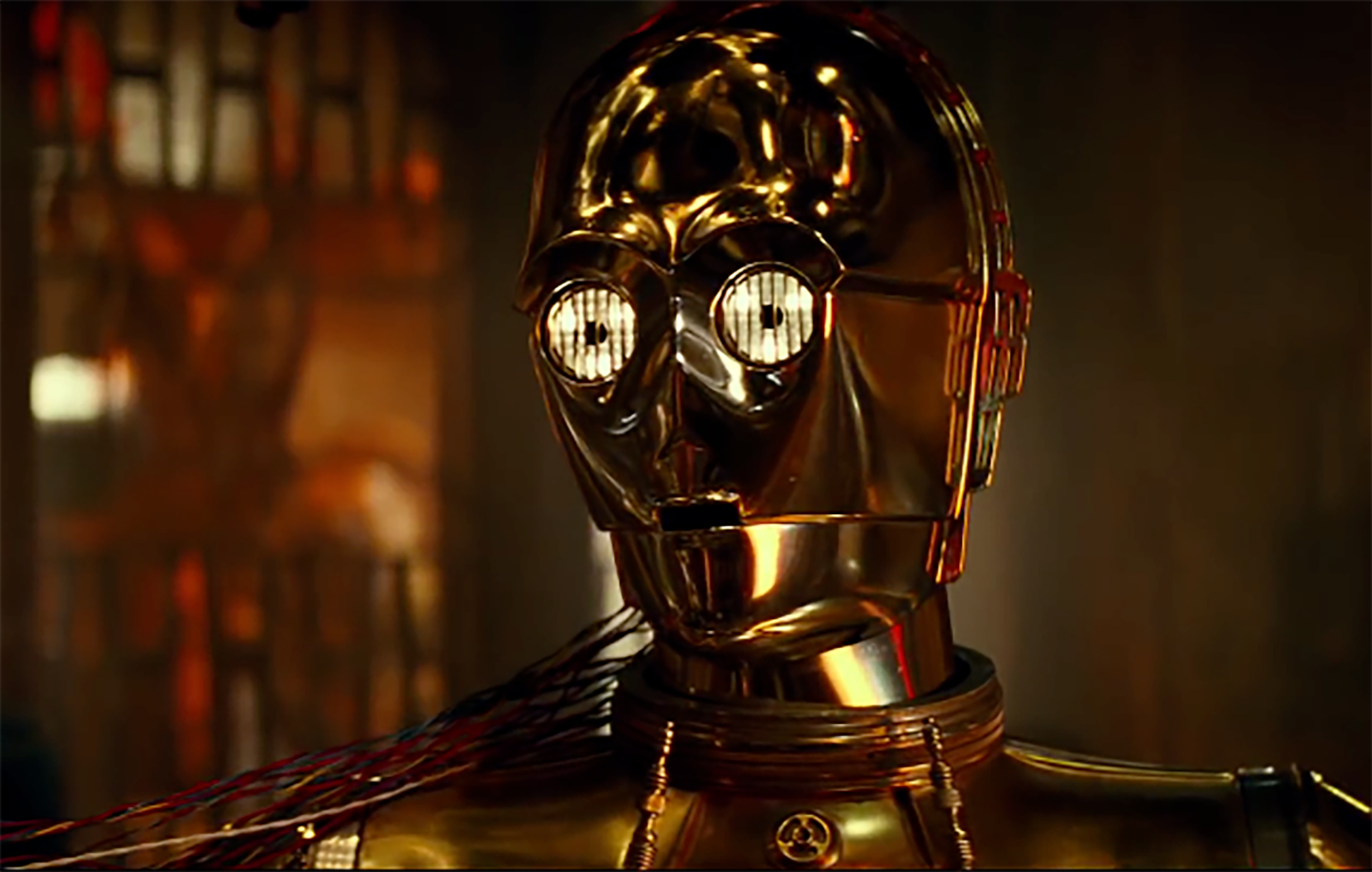 We’re doomed: C-3PO could be destined for the scrapheap. Credit: Lucasfilm / Disney

In the final trailer, it appears that everyone’s favourite neurotic robot could be set to sacrifice himself. As he’s powered up for perhaps the last time ever, Threepio announces that he’s “taking one last look, sir, at my friends”. First Han copped it in The Force Awakens, then The Last Jedi did for Luke and now this? Is Disney determined to kill off every member of the original gang?

Since his debut in 1977’s A New Hope, C-3PO has become a beloved part of Star Wars lore. With the end in sight, it would make sense that he’s symbolically killed off to make way for the new era.

Palpatine’s back, tell a friend… 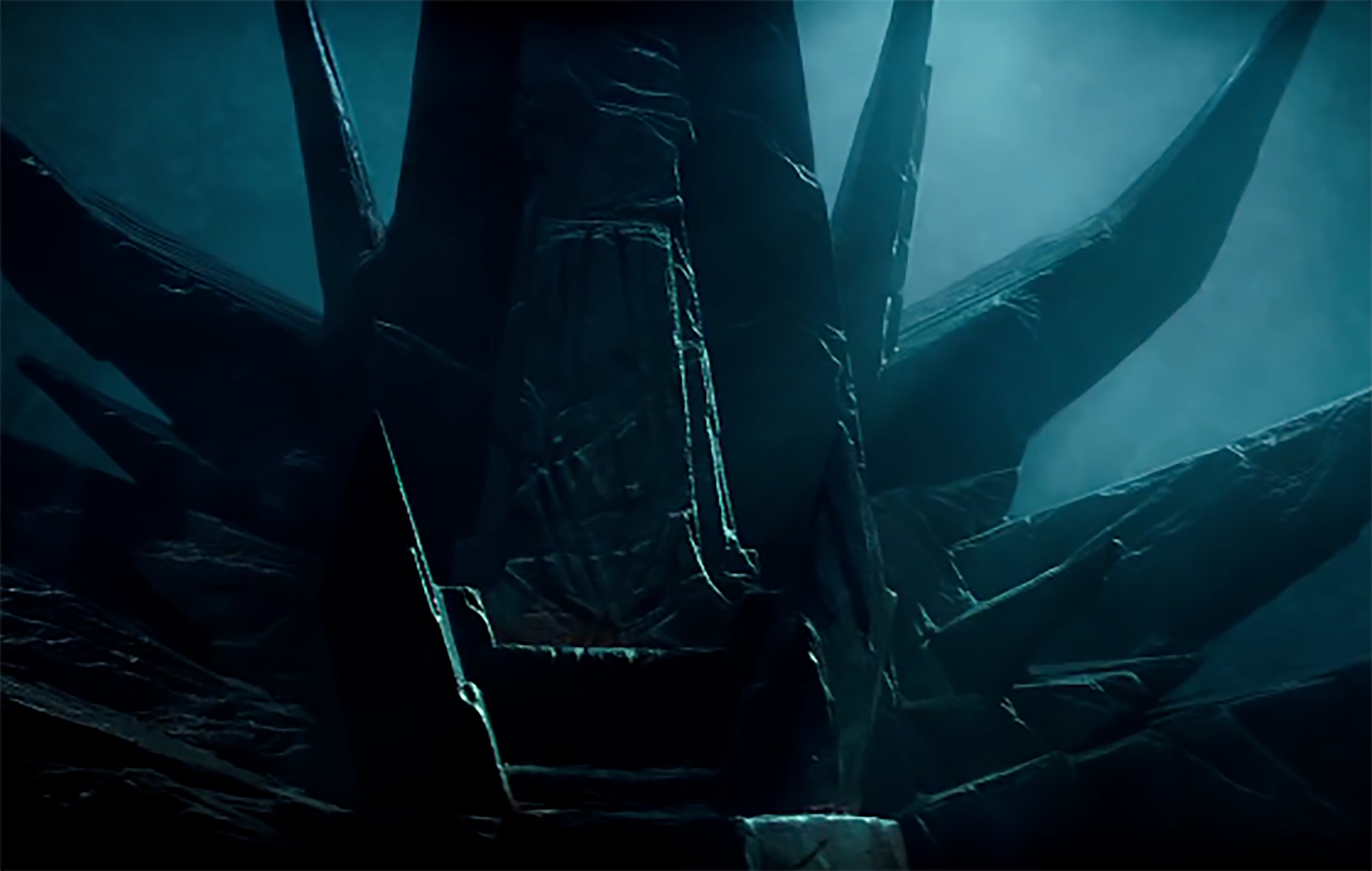 Throne room: is this where Palpatine’s been plonked for the last few decades? Credit: Lucasfilm / Disney

Palpatine is back. After the sinister Emperor’s return was confirmed earlier this year, the trailer provides the first look at his suitably creepy throne. We don’t see him in person, but you can hear his raspy tones as he proclaims: “Long have I waited”.

That’s a long time to be sat on your arse. Wonder what he’s been up to…

Will Rey and Kylo Ren team up? 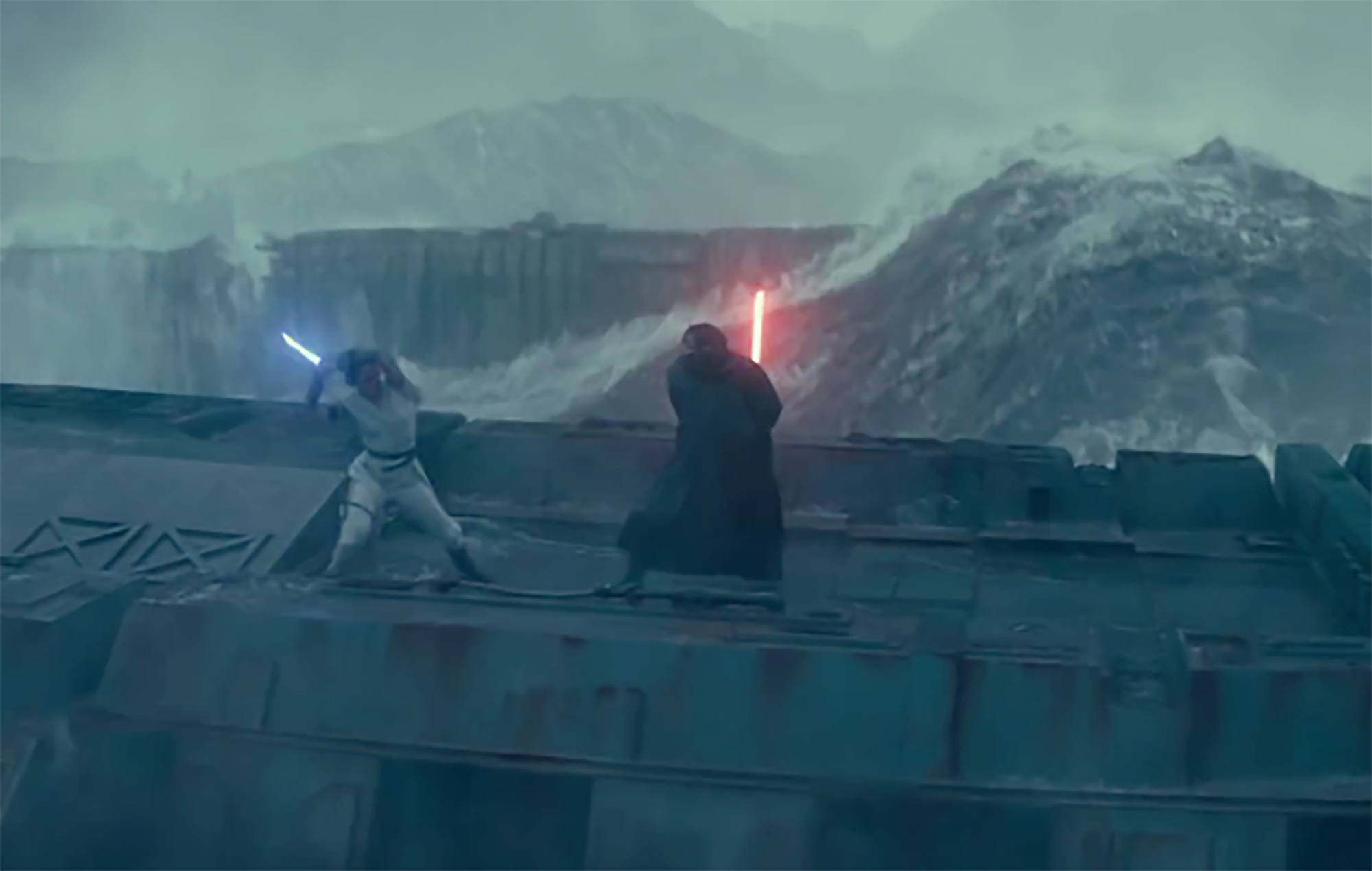 It looks like the will-they-won’t-they narrative between Kylo and Rey isn’t disappearing any time soon. The trailer shows the pair preparing to fight each other, before teaming up to destroy what appears to be Darth Vader’s iconic helmet.

“People keep telling me they know me – no one does,” says Rey, before Ren replies: “But I do.”

As The Force Awakens taught us, J. J. Abrams bloody loves a callback to previous Star Wars movies. With this in mind, we wouldn’t be too surprised if it’s Ren and not Rey who switches allegiance, mirroring how Darth Vader redeemed himself in defeating Emperor Palpatine at the climax of Return Of The Jedi. As George Lucas famously said during pre-production on Revenge of the Sith: “It’s like poetry. They rhyme.” Let’s hope things turn out better on this occasion…

Did they just kill Darth Vader (again) in The Rise of Skywalker trailer? 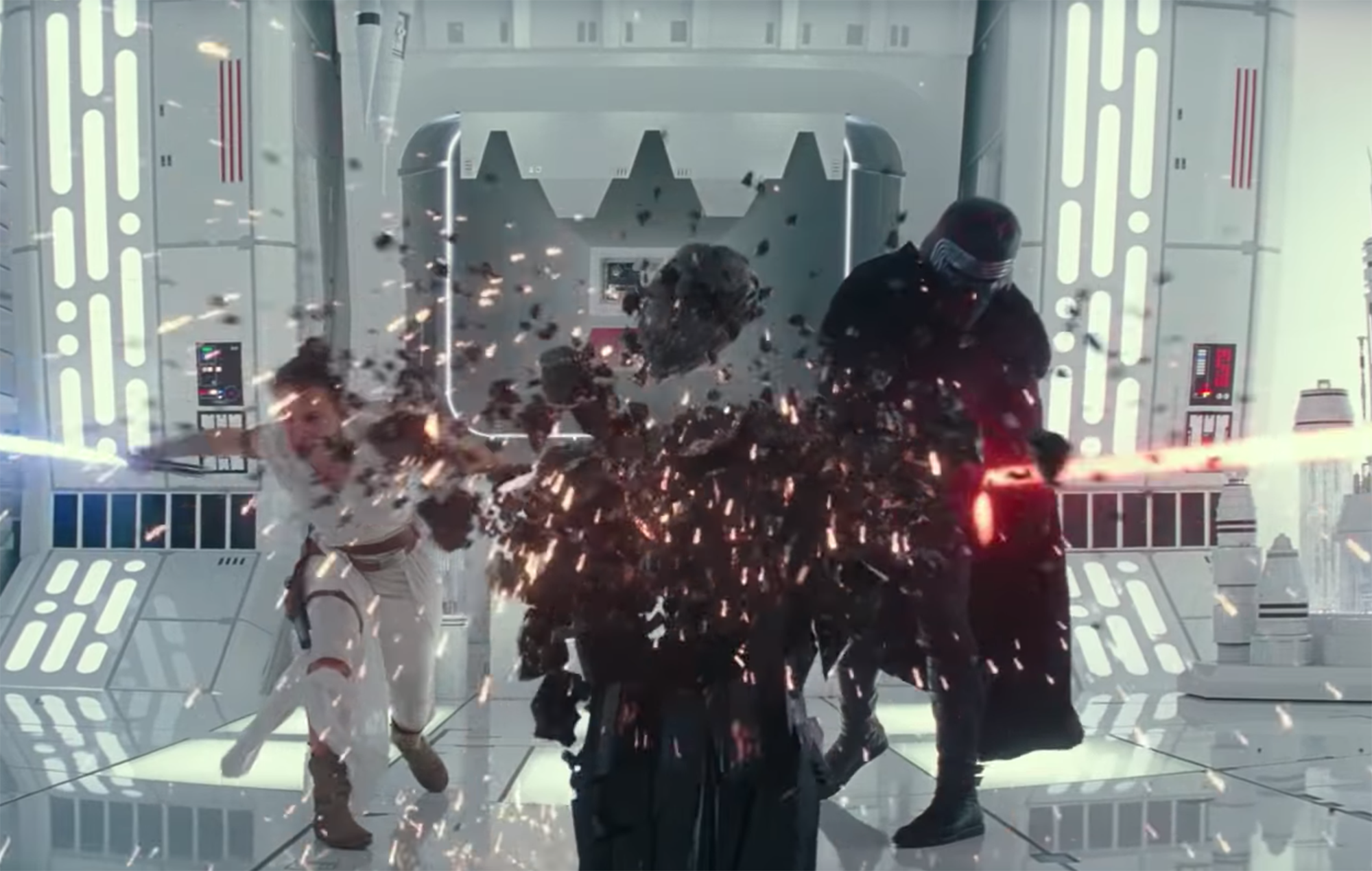 Halfway through the goodie-stuffed teaser, there’s a massive spoiler. Presumably now on the same side, Rey and Ren team up to smash their way through a black artefact that’s perched on top of a plinth. It’s obviously Darth Vader’s mangled helmet, which we caught a glimpse of in The Force Awakens. Back then, a confused Kylo was declaring his undying loyalty to the squashed mask that belonged to his grandfather. So why would he be trashing it in The Rise of Skywalker?

Don’t think it’s definitely Vader’s battered hard hat? Well, we might be wrong, but the white surroundings perfectly match the background of Kylo’s location in The Rise of Skywalker‘s D23 footage. That clip was cut so it looked like Ren was glaring through a protective case, but it’s almost certainly the same room.

The Rebellion is back, baby 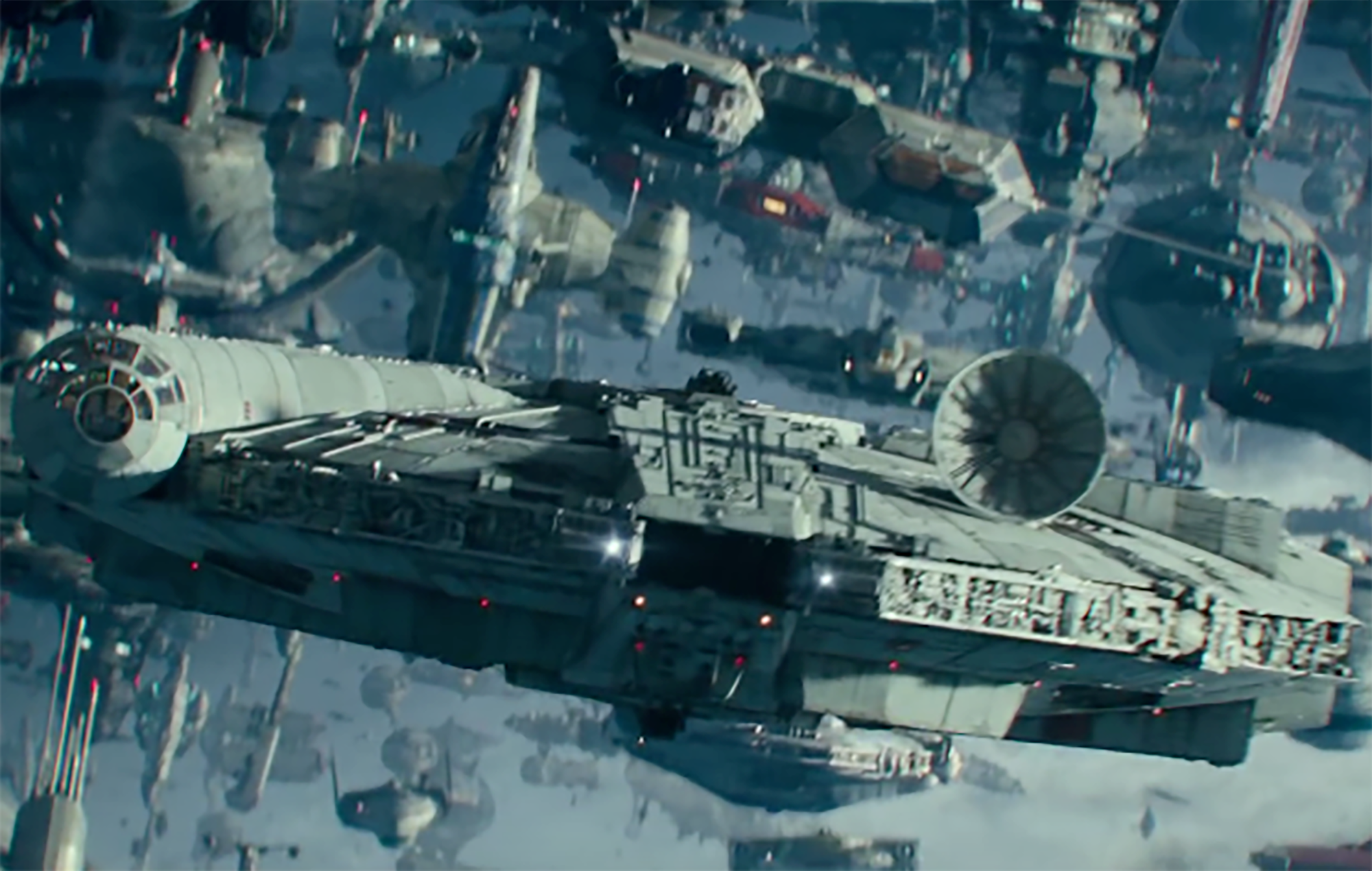 Hunk of junk: the Millennium Falcon leads an attack in ‘The Rise of Skywalker’. Credit: Lucasfilm / Disney

It’s fair to say that the entire Resistance were down on their luck at the end of The Last Jedi. Sitting in a cave, beaten and vastly reduced in numbers, it looked like their threat to the First Order was non-existant.

But it seems that things have turned around for the better. In one of the trailer’s most dramatic moments, we see the Falcon ready for battle – flanked by a series of other ships. Has General Leia been doing some recruitment in the gap between films? 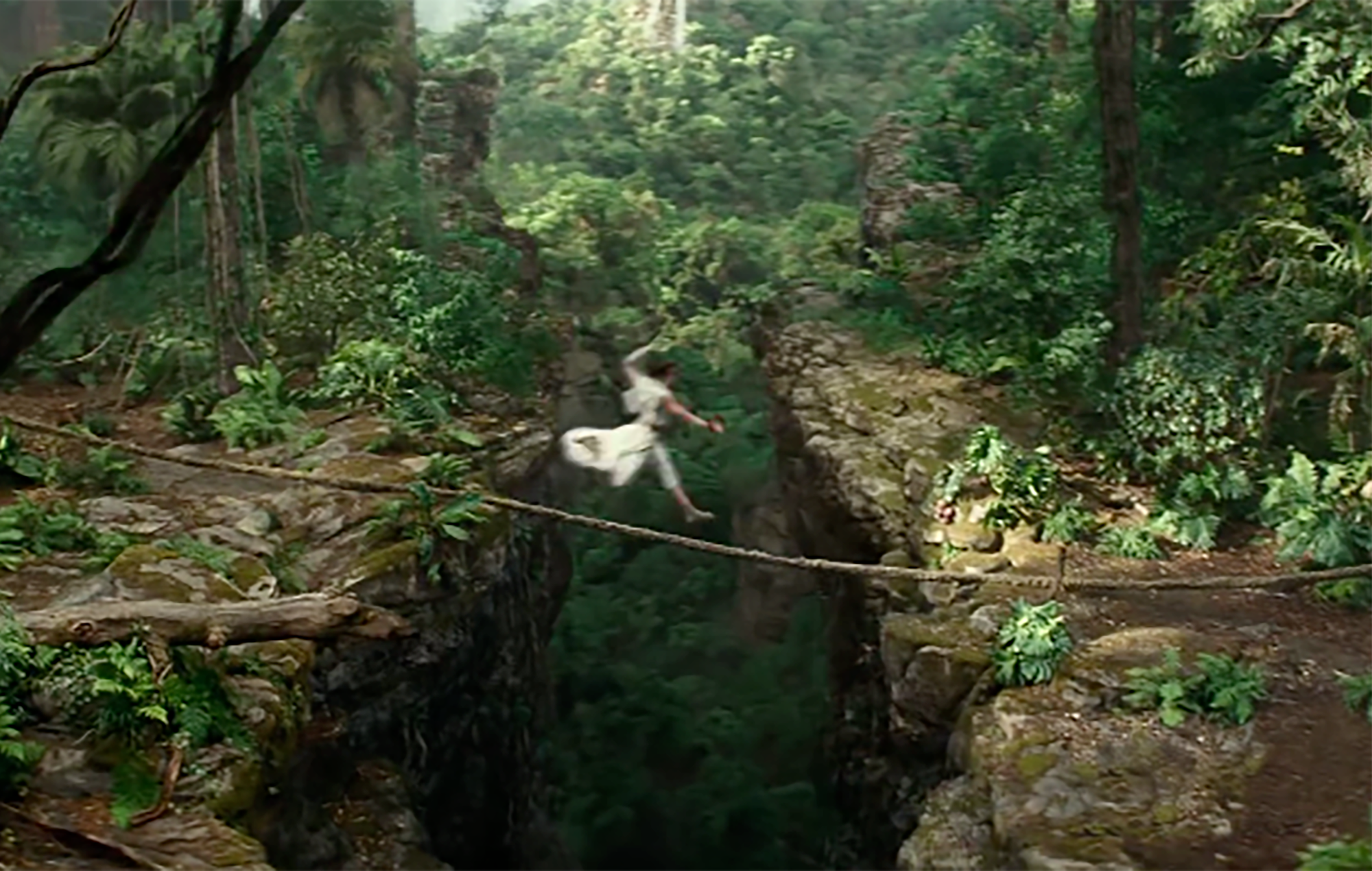 Jump Jar-Jar, jump: Rey makes like the Gungan senator and hops across a bridge in ‘The Rise of Skywalker’ trailer Credit: Lucasfilm / Disney

The Rise of Skywalker trailer begins with Rey hurrying across the vast greenery of a planet that looks very much like Endor (the scene of a last-ditch rebel fightback in 1983’s Return of the Jedi).

Although there’s no guarantee that it is the beloved home of the Ewoks, we’re holding out hope that J. J. Abrams’ love of a callback comes to the fore again.

Discover & share this Ewok GIF with everyone you know. GIPHY is how you search, share, discover, and create GIFs.

They managed to give the Empire a hiding, and we’re entirely confident that Star Wars’ tiniest heroes will be able to kick some First Order ass too. Bring it on.

And just all of the feels 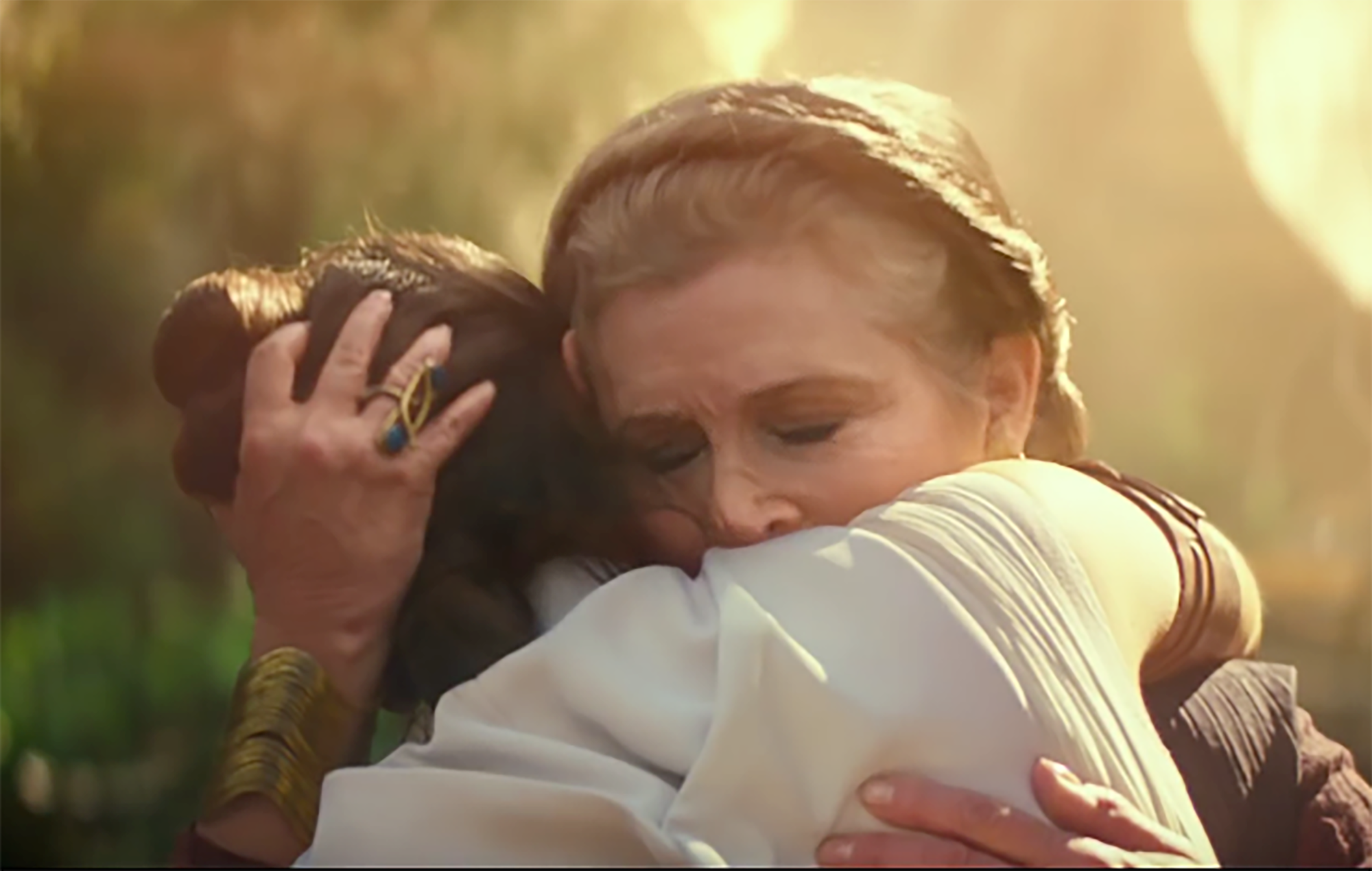 Rebel hero: fans were given a sneak-peek at General Leia in the new trailer. Credit: Lucasfilm / Disney

We knew it would be emotional. Look. Just look at this photo of Leia (the late great Carrie Fisher) as she dishes out a big old hug to Rey. Our tear ducts are not ready.

Star Wars: The Rise of Skywalker hits cinemas on December 19

The post 'Star Wars: The Rise of Skywalker' trailer: here's everything we learned from the new teaser appeared first on NME.