Alt-rock duo divulge on the tough road that led to their latest LP, 'You Can't Kill Us.'

Icon for Hire have been to hell and back but are here to tell the tale. And while the band was in New York City to play Webster Hall, we took them out to some sushi t0 chat about the wild ride they've been on. Meeting them at Yuba right before the dinner rush, the two Nashville musicians were sitting comfortably in their seats as this frazzled writer strolled in. After getting settled with some green tea and putting in orders, we got down to business. And while some bands may be shy about their personal and professional struggles, Ariel and Shawn Jump spoke comfortably about how they got to this point in their careers. 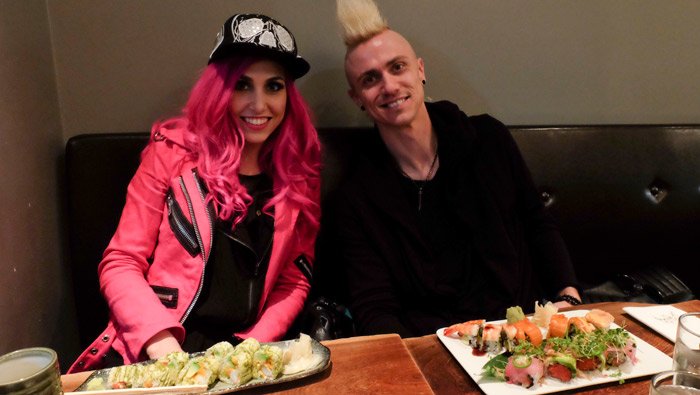 After releasing 2011's Scripted and their 2013 self-titled record, they were Billboard chart regulars and toured from city to city. However, after various differences and disagreements with their label, Tooth & Nail, Ariel and Shawn were ready to do their own thing and eventually broke their contract to go the indie route. But their road to independence wasn't an easy one.

"We were dealing with our fans wanting more music and more music videos," Shawn explains. "And our label [at the time] wasn’t letting us release any music. So we were held hostage there at this indie label that we had a major record deal with a small, small label."

Icon for Hire, who originated in Decatur, IL, tried to keep their operation going. But they soon had to face that fact that the money they used to have being with a label just wasn't there anymore and eventually filed for bankruptcy.

"Personally, I had internal struggles with fans coming to the shows," Shawn admits. "We've changed their lives. I don't know how, but we do. So I felt that personal responsibility to air out this is why we haven’t been doing stuff. So now that we’ve filed bankruptcy, we’re all coming together and doing this together. We filed bankruptcy, which was really hard and really scary. And I wanted to let the fans know that we’re here. We’ve arrived now. We’re going to do this together. So you better catch us.'"

And rally they did. When it came time for Icon for Hire’s third album, You Can’t Kill Us, the independent musicians needed to figure out how to actually pay for making it. So they went the crowdfunding route and explained their story via Kickstarter.

Because of their dedicated fanbase, the band had a feeling they’d reach their $2,000 target. "We [thought] we'd get more than that because our fans have stepped up so much for us in the past," Ariel said.

And as they saw the numbers rise, Shawn said, "It was like a party every day. We were in the studio when we released it. So we were high-fiving and kept refreshing our phones."