Welcome to the latest edition of The Offramp!

Each month, rock writer Corbin Reiff will highlight some of the most dynamic artists and projects going on in music today. Throw on the turn signal, crank up the stereo and enjoy the ride!

Heaven means many things to many people. To some, it’s a physical plane; the ultimate reward for a life well-lived. Others think of heaven as a state of mind or a place deep within us that we can tap into and visit, even if only for a little while. Then there are those who find pieces of heaven in the small glimmers of happiness that enrich our lives on a daily basis. For Tim Showalter, the chief creative mind behind Strand of Oaks, heaven is all of those things and then some.

“I like to be alive,” Showalter says through a slight laugh over the phone. “I like this existence thing. I don’t know if I could have confidently said that for a good part of my life. I’m not being eloquent about it, but I think that’s kind of what it boils down to.”

Showalter has long used music as a cathartic space to work through some of the more traumatic incidences of his life. His breakthrough, 2014 album Heal was created in the wake of a catastrophic car wreck that nearly killed him and his wife on an icy interstate in the Midwest. The song “Taking Acid and Talking to My Brother” on its follow-up Hard Love touches on the harrowing beside vigil he held with his brother, who was in the midst of a medically induced coma. He literally has the word “Survive” tattooed across his forearm.

“I had so much to say on Heal it took me two more records to get it all out,” he said, referring to Hard Love and its 2019 follow-up Eraserland. Sadly, when it came time to work on what became In Heaven, Showalter was again facing with new tragedies. His wife’s mother tragically died in a fatal car crash. Then, shortly before moving from Philadelphia to Austin, Texas where he now resides, he was forced to put down his beloved cat Stan. It was a period marked with intense personal turmoil, and nearly unspeakable grief.

This time, however, when forced to confront such brutal emotional blows, Showalter experienced a shift in outlook “ I wanted to make this album feel like a New Orleans funeral,” he said. “My wife’s mom is gone. Her best friend in the world. She’s gone and I can’t change that. Faced with such permanence I decided to pivot and celebrate…I was pretty fucking lucky to be able to love this person and have them love me back. Or my cat. I don’t want to send them off in sadness. I want to send them off with a fireworks show and just say, ‘Thank you for being there.’”

It’s an ambitious goal, to say the least, but as a self-described, “cosmic space cowboy surfing the existential waves,” Showalter felt up to the task. He tapped deep into the recesses of his own mind and then beyond while crafting this particular suite of 11, synth-slathered congregations with the metaphysical plane. Even he has little idea where this music ultimately came from. “I can confidently say this album was about 98% subconscious,” he said. “Even [my last record] Eraserland had intention. This had no intention. It manifested itself. I don’t want to be the 100th billionth songwriter to say that I pulled something from the ether, but I did.”

Take the opening track, “Galacticana” as a prime example; an ephemeral meditation on memory and togetherness that ultimately explodes into a parabola of wailing electric guitars. “I would sing the vocal melody in this made-up language,” he explained. “I would do that in the morning and then at night I would just dig into these things. I’d have my computer open. I would just hear this fake language. Within that fake language, I heard [the opening line] ‘I believe in ecstasy / I believe that ecstasy happens when we all get together.’” From there, he was off to the races.

Originally, “Galacticana” was the guidepost Showalter used to dictate where he wanted to take things, sonically and otherwise. “That’s the only reference point,” he said. “It’s like it’s not Americana. It’s just galactic music. It’s the only way I can make any sense of it.”

It was his close friend, the Secretly Canadian Records founder Chris Swanson who ultimately helped him recognize where he was truly going, both spiritually and musically. “He’s been a mentor of mine since I started sending him demo tapes when I was 19,” Showalter said. “He was in the studio with us in L.A. when we showed him the songs. Chris looked at me and he’s like, ‘This record is called In Heaven.’ I’m like, ‘No. It’s called Galacticana.’ He’s like, ‘No, dude. This record’s called In Heaven.’ We all had one of those misty-eyed collective gasps and we’re like, ‘It is called In Heaven. That’s the name of this album.’”

Heaven means many things. On the dynamic Heal single “Goshen ‘97,” Showalter once rhapsodized about “Singing Pumpkins in the mirror.” On his latest record, he actually wrangled an appearance from one of those Pumpkins, guitarist James Iha, that he used to mimic all those years ago. “It represents everything about how this album happened,” he said. “Writing, making it, the musicians; it’s a perfect encapsulation of it.”

You can practically hear the shades of paradise in his voice as he recounts how it all went down. “My manager works with James Iha too and like a complete naïve person, I was like, “Well, James should be on the record. This song sounds like The Cure and I know James loves The Cure.’

The Cure-sounding song Showalter sent was called “Easter.” He had no idea whether Iha would be into it or not, but decided to go for it anyway. “We sent him the track and he’s like, ‘Well, what would you like out of this?’ I was like, ‘You to have the most fun you’ve ever had making music.’” Vague instructions, sure, but apparently open-ended enough to allow Iha to go wild. “I just wanted him to just play some guitar and he sent back vocals, glockenspiel, synthesizer; like a whole song’s worth of ideas.”

Receiving the fruits of Iha’s labor was very nearly the fulfillment of a dream almost too massive to properly imagine. “My first memory I had of music was seeing James Iha on that ice cream truck in the ‘Today’ video,” Showalter said. “That’s the first memory I had. I was in sixth grade.”

The fact that it was “Easter” that Iha participated on is a massive amount of icing on an extremely well-baked cake. In many ways “Easter” operates as the emotional heart of the entire record. It was the song that Showalter wrote specifically for his wife Sue in a glorious, and sonically bracing attempt to express just how much she means to him. “I say she’s my Easter, and that’s it,” he explained. “She’s my hope. She’s like the resurrection for me. She’s living as an example of how I want to live. She knows that she’s here, and she’s got stuff to do, stuff to be fascinated by. I get to live with that person. It’s crazy Indiana guy landed an absolute diamond. I don’t know. It’s pretty incredible.”

That’s not to say that Heaven is always the happiest place to inhabit. “I cried a lot during making this album,” he said. “We all did. A lot of catharsis. There was a funny thing that happened in the studio where I was talking to Kevin one day and told him, ‘This is the celebration. This is the album.’ He’s like, ‘Tim, you’re literally singing “This world’s not meant for me.”’ I’m like, ‘Shit. Yeah, there are some peaks and valleys on this album after all.’ But that was my mindset though creating it.”

The peaks were enhanced by the presence of Carl Broemel and Bo Koster, guitar player and keyboardist respectively in one of Showalter’s favorite bands My Morning Jacket. “Carl got to be in his laboratory with just no rules. Same as Bo. We had three days to just spend 12 hours every day of just laughing, and talking, and drinking coffee, and playing synthesizers,” Showalter said. “When we were doing ‘Horses at Night’ and I was playing a synthesizer called The Selena — it’s a string synthesizer that they used on Dark Side of the Moon — I got real emotional because I realized this is what I’ve tried to do. When I was making Pope Killdragon what I thought I was doing.”

“Horses at Night” is the first instance where In Heaven’s patron saint, Jimi Hendrix makes an appearance. He shows up again later on the song “Jimi & Stan” palling around with Showalter’s departed cat. Where the specter of the celebrated, Seattle guitarist came from, Showalter knows not. “I think in my mind, I just needed Jimi to kind of be like an angel. I needed to just have somebody to talk to,” he said. 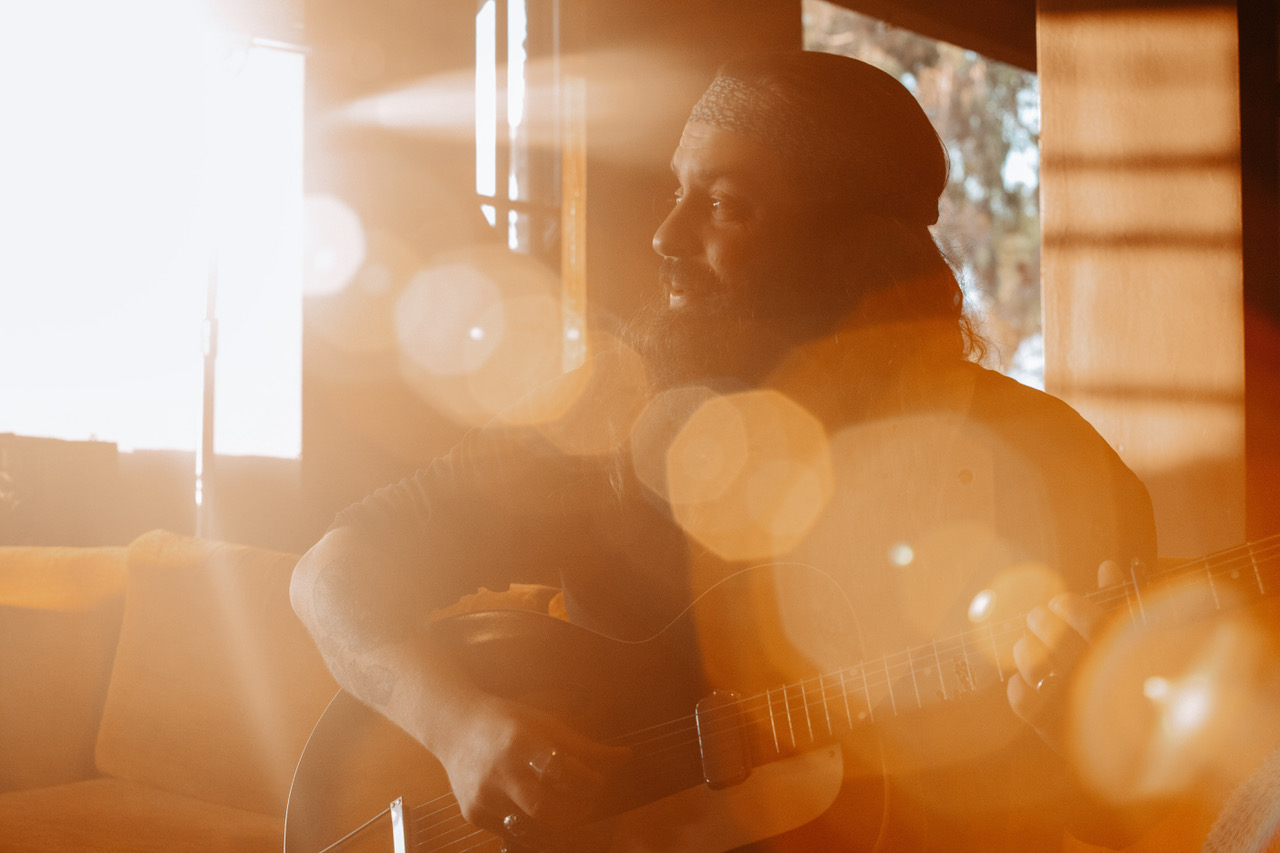 “September 6, 1970,” Showalter practically whispers in the opening line of that song’s final verse. That date of course marks the guitarist’s final performance in Germany before dying a couple of weeks later. What appears to be a trivial reference actually operates as a window into Showalter’s entire outlook on the world. “Jimi, 50 years ago, made that sound. And that light refracting off of him moves out into the universe.”

That idea gave way to an even more comforting one. “Maybe aliens 50 light years away, who are having just as bad a day as I am, get to hear Jimi Hendrix?”It’s a nice thought to consider. An unknown species, billions of miles from our little spinning rock completely and totally awed by the brilliance of Hendrix’s electric, “Purple Haze.” Humanity’s light shining far beyond our own capacity to comprehend.

Somehow, Showalter found solace in the vast, seemingly empty void that is our universe. He plucked hope out of infinity. “I don’t know why that’s so emotional to me but it’s like the only way I got through it,” he said. “I had to get huge. I had to get real big to make sense of this. That’s kind of what heaven means. It’s not a religion heaven. It’s that hope that like…Jimi is with my cat.”

When talking to Timothy Showalter these days, two words seem to pop up more than any others. “Grateful” and “Gratitude.” As the man himself explains, “I do feel this power that comes with trying to focus my life on positive things,” he says. “Are we running away from severe darkness? Maybe, but at least we’re fucking running. We’re active, and we’re trying. What else can we do?”

The post Tim Showalter on the Cosmic, Existential Journey to Strand of Oaks’ In Heaven appeared first on SPIN.