Sheeran reportedly played for free "as a favor"

Ed Sheeran once again broke his current hiatus on live performances to play a private show for the daughter of celebrity chef Gordon Ramsay to celebrate her 18th birthday.

The ‘Shape Of You’ singer played a five-song set, as well as leading a rendition of ‘Happy Birthday’ for Tilly Ramsay, at a James Bond-themed party hosted at Cuckoo Club in Mayfair, London. 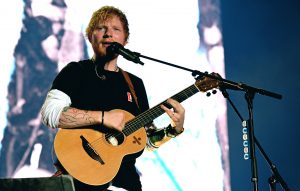 Despite original reports suggesting that Ramsay paid Sheeran’s rumored fee of £500,000 for a private show, Metro subsequently claimed that he had played for free as “a favor”.

The move also conflicted with his announcement, made at the end of his ‘Divide’ tour this summer, of an 18-month hiatus from live gigs. Sheeran also made another surprise return to the stage alongside Japanese band ONE OK ROCK during their Tokyo gig earlier this month.

Additionally, he broke the hiatus in September when he appeared on stage at Khalid‘s O2 Arena show to sing his verse from the pair’s collaboration ‘Beautiful People’.

Meanwhile, Sheeran’s manager Stuart Camp has said that the singer, who’s been named as the UK’s richest celebrity under 30, is conscious of “overkill”.

“I never want anyone to be bored of him. But I guess if he’s top of the charts then they’re possibly not,” he said.“You just want to make sure that’s a fair representation.”