Wet Leg’s debut album is set for release on April 8.

Wet Leg is riding a wave of Tiktok virality. The indie-rock duo (Rhian Teasdale and Hester Chambers) rose to prominence after their single “Chaise Lounge” blew up on the social media app. Now, with their debut album Wet Leg set to release on April 8 (available for preorder here) the group has shared new single Angelica alongside an accompanying ’70s-inspired video taking place on a scenic island landscape.

The video was self-directed by the band, a release describes as “an unbridled record of Rhian and Hester’s friendship complete with high-kicks, fisticuffs, kiss-and-make ups, vast amounts of hair and even more dancing.”

The track is named after Rhian’s oldest friend, “Angelica” and was recorded in bedroom-pop-esque fashion in Hester’s living room. The synth-infused track named after leads listeners through the absurd, sardonic, and socially anxious journeys through early adulthood’s highs and lows.

“It’s laced with disenchantment,” Rhian says. “Even though the chorus is ‘good times, all the time.’ That’s just impossible, isn’t it?” 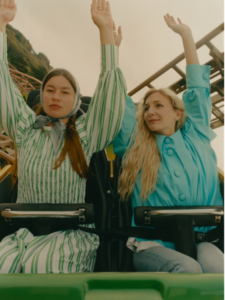 The duo will take their newfound fame onto the stage with an extensive array of upcoming show dates set for this spring and summer.

May 25th – Berghain/Kantine, Berlin – sold out