The legendary bassist wanted to set himself a "challenge"

The long-awaited book, which was first announced in 2014, finally hit shelves yesterday (November 5) and sees the bassist open up about his difficult childhood, past drug problems and more.

Following its release, Flea – real name Michael Balzary – has revealed why he chose not to write too much about the Chilis in the autobiography, with the group only being introduced towards the end.

“I thought if I wrote a book about the Chili Peppers, it’d be like cheating,” the musician told BBC News.

“But if I could write a book about my childhood that could exist on its own merits, without the band, then I deserved to write a book. That was the challenge I set for myself.” 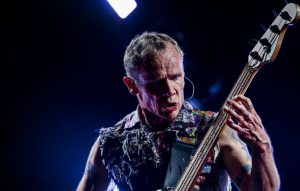 Flea went on to speak about RHCP playing their first show together under the name Tony Flow and the Miraculously Majestic Masters of Mayhem, with Acid For The Children concluding when the gig took place in 1983.

Recalling how the group never took themselves seriously, Flea said: “When we started the band, everything was about what was funny to us. We really loved this song, so we came up with a dance routine in our living room, going, ‘This would be so fun!’

“And, you know, it was the most fulfilling experience, artistically, that I’d ever had in my life.”

Meanwhile, Flea has touched upon his conflicted relationship with his fellow bandmate Anthony Kiedis. Within his memoir, he describes the Red Hot Chilis frontman as “controlling”.

The post Flea on why his new memoir ends before the Red Hot Chili Peppers take off appeared first on NME.