They're bringing the psych to Vicky Park...

Tame Impala have been confirmed as the first headliner for All Points East festival 2020, topping a line-up that includes the likes of Glass Animals, Caribou and Whitney.

The Australian psych-rock icons will play the third edition of the East London festival on Saturday May 23, in what is set to be their first UK show after the release of their fourth album ‘The Slow Rush’ on February 14 2020.

Tickets for the massive Victoria Park show start from £65 and you can buy them here from 10am on Friday November 22.

It comes after All Points East returned to Victoria Park for its second year in 2019, boasting headline sets from The Strokes, The Chemical Brothers, Christine & The Queens, Bring Me The Horizon and Mumford & Sons.

Last month, Tame Impala shared their latest single ‘It Might Be Time’,  which follows on from ‘Borderline’ and ‘Patience’. 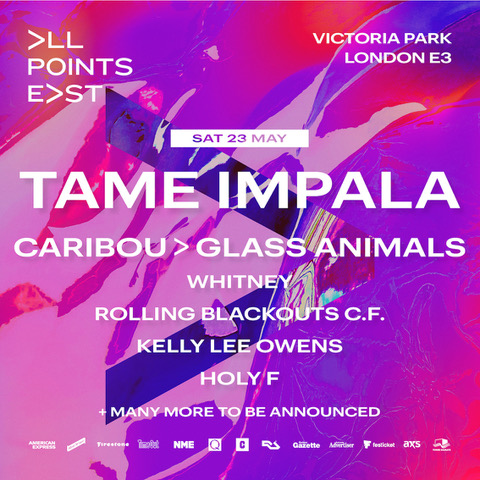 Announcing the record, Tame Impala’s Kevin Parker said: “There are all sorts of excuses I could serve you but it basically all comes down to me hating the idea of giving you anything that isn’t the best my entire heart and soul and brain can give.

“But I’m so fucking relieved the day has finally come that I can give you a date, I guess you are too…”

Despite the lack of a new record, Tame Impala have continued to tour throughout 2019 – including a triumphant headline set on Glastonbury’s Other Stage in June.

NME’s five-star verdict stated: “A worthy spectacle on the Other Stage then, and, should their new album hit just as hard as previous releases, it’s hard not to imagine them headlining the whole damn thing in the near future.”

The post Tame Impala confirmed as first headliner for All Points East 2020 appeared first on NME.