Bey has been spotted in South London

Beyoncé is reportedly shooting her latest music video in London.

According to Mail Online, Bey is filming on a number of estates in South London as she prepares to release ‘Brown Girl Skin’ as her next single.

Reports say the ‘Lemonade’ singer’s team have been spotted so far in Catford and Thamesmead. A casting call for what is thought to be for the project has asked for people “of all cultures, nationalities, ethnicities, genders, ages and backgrounds” to appear in the video.

A source told the Mail: “Beyoncé wanted this video to truly represent the essence of the song. She may refer to Naomi Campbell and Lupita Nyong’o in the track but she was keen to have normal people step forward and tell their stories.” 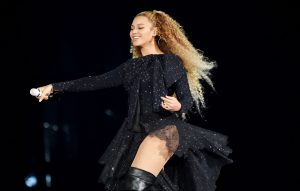 Recently, Kelly Rowland has addressed the ongoing rumours of a potential Destiny’s Child reunion, explaining that she hopes it would remain a secret should the group reunite in the future.

Beyoncé, Michelle Williams and Rowland – who spawned the hits ‘Independent Women’, ‘Survivor’ and ‘Say My Name‘ as the huge girl band – briefly got back together during Beyoncé’s Coachella headline set last year. They previously shared a stage as part of her Super Bowl halftime show in 2013.

Rowland spoke out on the persistent whispers in an interview with Entertainment Tonight. “I will say, we have made incredible music in the past, and I don’t know [if the group will return],” she told the outlet.

She added: “Can we, like, have surprises in this day and age? I mean, I’m just saying. I just find it so interesting, everybody wants to know in advance….I know every time there is a decision to be made for myself and the ladies to do something, it’s usually a surprise.

“And our fans have always been so supportive and so awesome, like, I like to give them surprises.”

The post Beyoncé is shooting her new music video in London appeared first on NME.