Through 7 seasons of threats, romances, and murders on Pretty Little Liars, Brendan Robinson’s character of Lucas has always been there for Hanna.

Their relationship has been a unique one on the show, and Myspace caught up with Robinson to talk about that relationship, as well as some of his favorite memories from filming the show, and what the table read was like for the final episode.

Spoiler alert – There were tears.

When PLL began you were 20 years old, correct?

I remember my very first day. The very first thing that we shot was Lucas and Hanna in the abstinence club. For me that was the scene I auditioned with for the show, and it was a really memorable setting, and I thank the writers for introducing the character with a bang. That was a great scene, and I still get people who come up to me, and remember that particular scene.

Did you imagine spending the majority of your 20s as Lucas?

Fun fact, I was originally supposed to be in 2 to 4 episodes, and that was it.

They ended up really liking, not in a romantic way, but the chemistry that Ashley and I had, and they felt like her relationship with Lucas, and having this platonic male friend, really brought out a different side of her character, and I totally agree with that. It’s one of my favorite relationships on the whole show. Then again, I’m biased.

It’s different from all of the other interactions that the four girls, five including Alison, have with guys on the show. It’s usually a romantic interest, or the guy is out to kill them.

Lucas has kind of been, obviously there’s been moments where we don’t know if he’s good, or he’s bad, or if he’s on the A team, or he’s not, but he’s always been this sounding board for Hanna in just caring about her as a person, which is different from her relationship with Caleb, obviously. 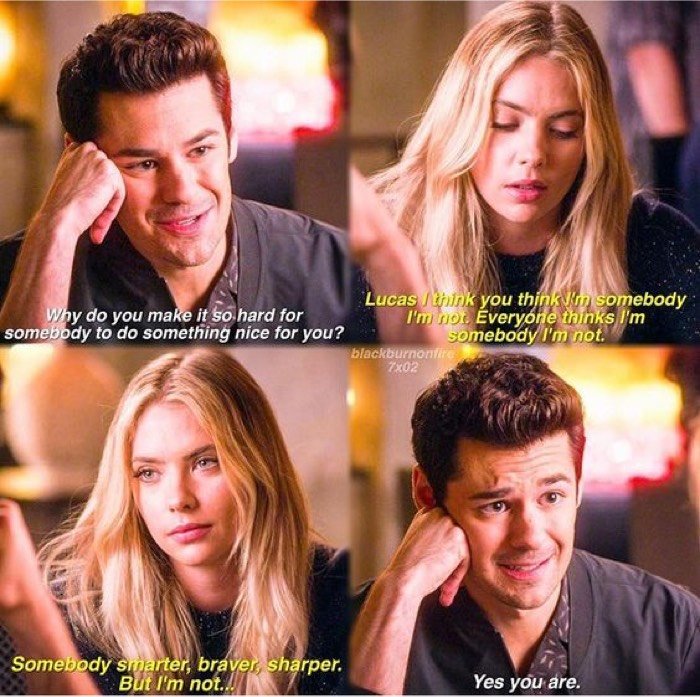