Harry Styles has opened up about dating Taylor Swift in a new interview.

The ex-One Direction singer recently launched his solo career with lead single ‘Sign Of The Times’. His self-titled debut album will follow on May 12.

Styles is reported to have dated Swift from October 2012 to January 2013. Asked about the relationship in a new interview with Rolling Stone, Styles said: “I gotta pee first. This might be a long one. Actually, you can say, ‘He went for a pee and never came back.'”

He then added of famous paparazzi photos of the former couple at New York’s Central Park: “When I see photos from that day. I think: Relationships are hard, at any age. And adding in that you don’t really understand exactly how it works when you’re 18, trying to navigate all that stuff didn’t make it easier. I mean, you’re a little bit awkward to begin with. You’re on a date with someone you really like. It should be that simple, right? It was a learning experience for sure. But at the heart of it – I just wanted it to be a normal date.”

Asked whether Swift’s songs ‘Out of the Woods’ and’ Style’ were inspired by their relationship, Styles said: “I mean, I don’t know if they’re about me or not, but the issue is, she’s so good, they’re bloody everywhere. I write from my experiences; everyone does that. I’m lucky if everything [we went through] helped create those songs. That’s what hits your heart. That’s the stuff that’s hardest to say, and it’s the stuff I talk least about. That’s the part that’s about the two people. I’m never going to tell anybody everything.”

“She doesn’t need me to tell her they’re great. They’re great songs… It’s the most amazing unspoken dialogue ever… Certain things don’t work out. There’s a lot of things that can be right, and it’s still wrong. In writing songs about stuff like that, I like tipping a hat to the time together. You’re celebrating the fact it was powerful and made you feel something, rather than ‘this didn’t work out, and that’s bad.’ And if you run into that person, maybe it’s awkward, maybe you have to get drunk… but you shared something. Meeting someone new, sharing those experiences, it’s the best shit ever. So thank you.” 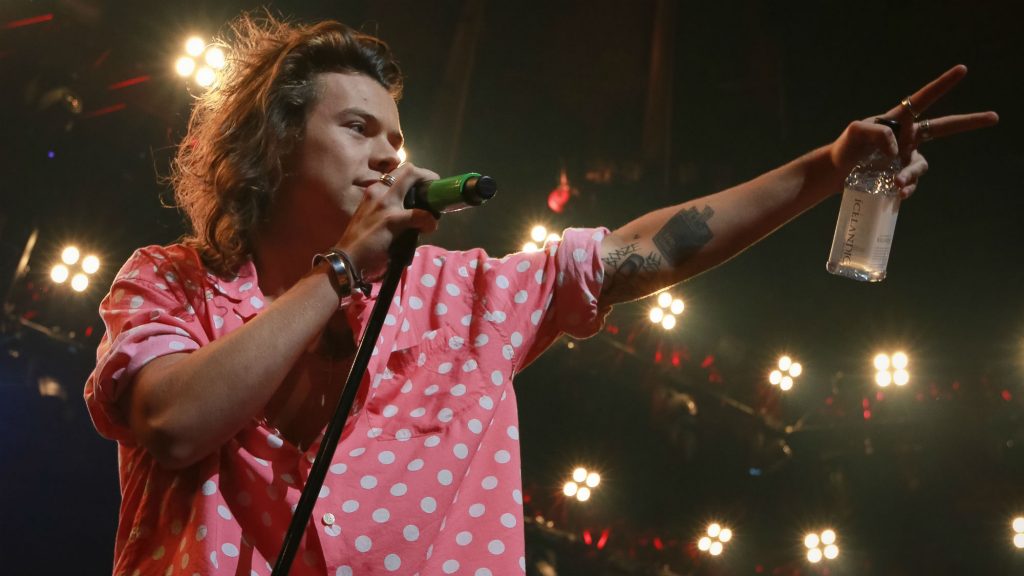 Styles went on to reveal that a more recent relationship inspired his solo material. “She’s a huge part of the album,” he said, refusing to confirm whether he was referring to rumoured recent girlfriend Kendall Jenner. “Sometimes you want to tip the hat, and sometimes you just want to give them the whole cap…  and hope they know it’s just for them.”

During the interview, Styles also talked about his first love, saying: “My first proper girlfriend used to have one of those laughs. There was also a little bit of mystery with her because she didn’t go to our school. I just worshipped the ground she walked on. And she knew, probably to a fault, a little. That was a tough one. I was 15. She used to live an hour and a half away on the train, and I worked in a bakery for three years. I’d finish on Saturdays at 4:30 and it was a 4:42 train, and if I missed it there wasn’t one for another hour or two. So I’d finish and sprint to the train station. Spent 70 percent of my wages on train tickets. Later, I’d remember her perfume. Little things. I smell that perfume all the time. I’ll be in a lift or a reception and say to someone, ‘Alien, right?’ And sometimes they’re impressed and sometimes they’re a little creeped out. ‘Stop smelling me.'”

Styles also used the interview to respond to Zayn Malik saying that One Direction is “not music I would listen to”.