The NFL wasn't the only thing going on this weekend... Just most of it.

Football is back, and the world is still a crazy place.

In case you were too busy worrying about your fantasy team this weekend (sorry, those of you who drafted Keenan Allen), we rounded up everything you missed. From an impossible-to-deny proposal to September 11 memorials, here's what you missed over the weekend.

There are many things that Beyoncé does pretty much perfectly, and now she can add planning marriage proposals to her resume. Queen Bey stopped mid-way through one of her most popular songs, “Single Ladies,” to allow one of her backup dancers, John Silver, on stage to say a few words. Now, while most of the crowd cheered for Silver, truth be told, they were probably wondering what this man was up to that would require Beyoncé herself to pause a song and give this notably well-dressed gentleman a microphone.

Silver gave his thanks to Bey as any human would and expressed his love for St. Louis, Missouri, where they were performing. Somewhere in his rave for his hometown, he switched thoughts and turned his love and attention towards one of dancers on the opposite end of the stage, his girlfriend, Ashley Everett. Confused in the moment, Everett anxiously watched as her man made his way over to her, got down on one knee, and asked for her hand in marriage. As the newly engaged couple embraced, Beyoncé fluttered over to congratulate the duo. But then it was back to work—after all, one simply cannot leave “Single Ladies” unfinished. The music queued up again, and Beyoncé jokingly said to Everett “Now let’s see if you can do the choreography after all of that.” It took her a moment to get back in the swing of things, but Everett was able to end the song as gracefully as she began it, only when it came to the part where she had to hold out her hand, this time she had a ring on it. 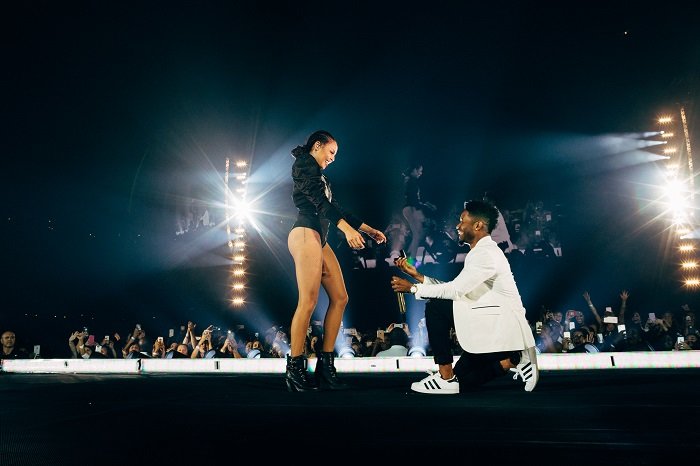 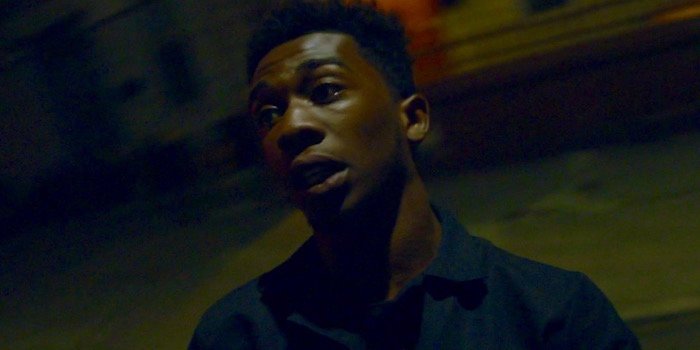 It wasn’t that long ago when Desiigner burst on the scene with “Panda,” the song that left no fan capable of driving down the street without blaring at outrageous volumes or spontaneously breaking out into some sort of seizure-like dance routine. The Brooklyn native found himself in a bit of trouble over the weekend when he and four friends were arrested in New York City after another driver called to report a road rage incident involving a firearm. The civilian was able to provide police with the license plate of the aggressive driver, and NYPD traced the description back to the recording artist’s SUV. Upon searching the vehicle, officers made a discovery and charged the group with possession of a controlled substance and criminal possession of drugs with intent to sell. Desiigner was also awarded a charge of criminal possession of a loaded weapon and menacing.

However, the rapper’s luck changed for the better toward the end of the weekend. The New York District Attorney made the decision to drop the felony gun charge, since no weapon was present when NYPD performed their search of his vehicle. Because the original reports leading to the initial search and subsequent arrest were based on the civilian’s claims surrounding the rapper brandishing a gun, the D.A. decided there was not enough evidence that would allow the charge to stick without a physical weapon. He then followed suit and dismissed felony possession of a controlled substance with intent to sell charge, although it’s not clear why. Desiigner wasn’t let off of the hook completely though — the last charges for felony possession of a controlled substance and menacing are holding fast. Here’s hoping this all gets sorted out. 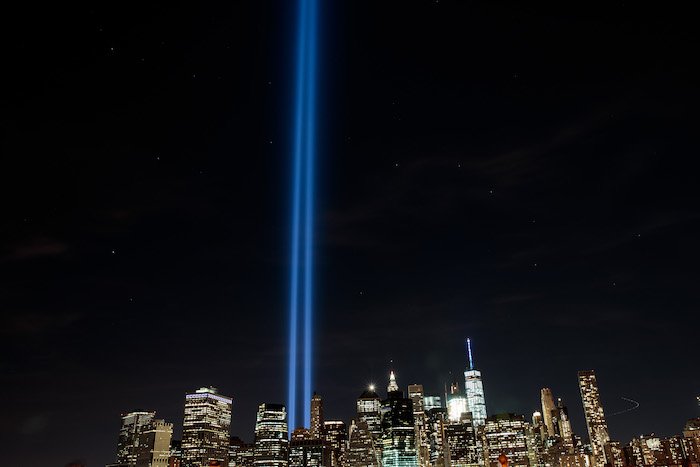 The United States found itself in somber spirits as it commemorated the 15-year anniversary of the September 11 attacks in New York City, Washington D.C. and Pennsylvania. Bright and early on Sunday, President Obama spoke to hundreds of family members, first responders, government officials and survivors alike who had gathered in Manhattan to pay their respects, listening to the names of the 2,983 casualties from both the 2001 and 1993 World Trade Center attacks. New York City Mayor Bill de Blasio and his predecessors Michael Bloomberg and Rudy Giuliani were in attendance, along with Donald Trump and Hillary Clinton, the two presidential hopefuls and New York natives.

Six very specific moments of silence were observed throughout the ceremony. At 8:46 a.m., the first bell rang for the moment at which the first plane struck the North Tower. The second bell marked the impact of the second plane hitting the South Tower. The third bell tolled for Flight 77 which crashed into the Pentagon, and the fourth bell marked the collapse of the South Tower. The fifth ringing was in honor of those aboard Flight 93 who were brave enough to divert their plane, which ultimately crashed near Shanksville, Pennsylvania, and the final bell at 10:28 a.m. was for the moment when the North Tower fell. Though the wreckage and devastation will always remain emotionally, Ground Zero now houses a tranquil memorial with a reflection pool and the names of all who were lost engraved along the plaza. Two powerful, blue lights which project towards the sky have taken their stead, as a reminder that we will never forget.

Kate Upton vs. the NFL

Her own personal scandals aside, 24-year-old supermodel Kate Upton decided to publicly air her grievances regarding her distaste for the behavior of the current roster of NFL players protesting the National Anthem. After seeing a photo of several Miami Dolphins team members kneeling while the rest of the players stood with their hands over their hearts, Upton took to her Twitter to scold them and anyone else who’s pulled the bold move. While her intentions may have been pure, they were a bit misguided. She shared: “In my opinion, the national anthem is a symbolic song about our country. It represents honoring the many brave men and women who sacrifice and have sacrificed their lives each and every single day to protect our freedom. Sitting or kneeling down during the national anthem is a disgrace to those people who have served and currently serve our country.”

In my opinion, the national anthem is a symbolic song about our country. It represents honoring the many brave men and women who sacrifice and have sacrificed their lives each and every single day to protect our freedom. Sitting or kneeling down during the national anthem is a disgrace to those people who have served and currently serve our country. Sitting down during the national anthem on September 11th is even more horrific. Protest all you want and use social media all you want. However, during the nearly two minutes when that song is playing, I believe everyone should put their hands on their heart and be proud of our country for we are all truly blessed. Recent history has shown that it is a place where anyone no matter what race or gender has the potential to become President of the United States. We live in the most special place in the world and should be thankful. After the song is over, I would encourage everyone to please use the podium they have, stand up for their beliefs, and make America a better place. The rebuilding of battery park and the freedom tower demonstrates that amazing things can be done in this country when we work together towards a common goal. It is a shame how quickly we have forgotten this as a society. Today we are more divided then ever before. I could never imagine multiple people sitting down during the national anthem on the September 11th anniversary. The lessons of 911 should teach us that if we come together, the world can be a better and more peaceful place #neverforget.

The Miami Dolphins players in the photo — Arian Foster, Jelani Jenkins, Kenny Stills and Michael Thomas — were all taking a page from Colin Kaepernick’s lead. The San Francisco 49ers quarterback told NFL media "I am not going to stand up to show pride in a flag for a country that oppresses black people and people of color." Foster responded to the criticism of their decision to kneel at their September 11 game by saying "When is the time? It's never the time in somebody else's eye, because they'll always feel like it's good enough. And some people don't. That's the beautiful thing about this country. If somebody feels it's not good enough, they have that right. That's all we're doing, exercising that right." Even the owner of the Dolphins, Stephen Ross, wasn’t upset by the actions of his players. What Upton failed to realize is that the National Anthem itself makes reference to slavery, and obviously Twitter had a field day.

@Nickidewbear @KateUpton @SportsCenter those players stood for the 9/11 ceremony, kneeled during the anthem.

@KateUpton And what exactly have you done for this country? I'm a #VeteransForKaepernick and you sure as hell don't speak for me.