We hung out backstage with people and pooches at the most prestigious dog show!

Earlier this week, all the top dogs from across the country came together at Madison Square Garden to compete for Best in Show at Westminster, the nation’s most prestigeous dog show. Under banners of purple and gold, breeds from around the world faced off in the ring looking for a ribbon and other wins in Best of Breed categories and Best of Group. We hung out backstage in the grooming area to chat with the owners, breeders, handlers and pooches to pull back the curtain on the dog show universe and find out what make’s their pup’s special. 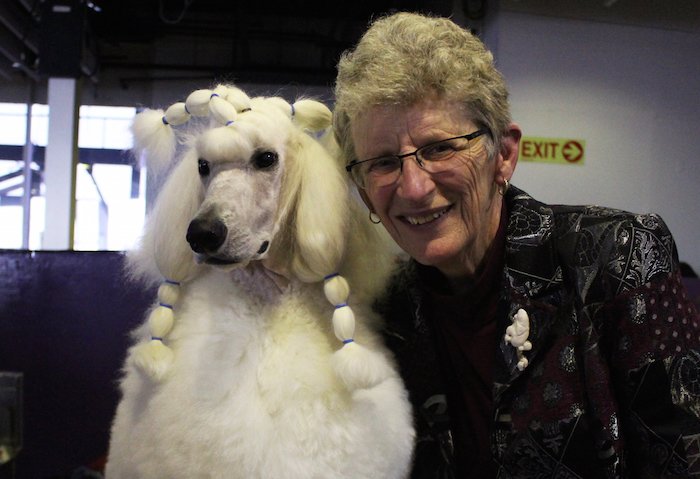 How old is he? 2 and a half years old, showing since 10 months old. He's a champion. He's going for his grand championship. He was here showing as a special at Westminster.
What do you have in common? Playing ball. That litter are very much ball players. Even his sister. I own his sister. They are very much ball players, fetchers, have fun.
If Regal could speak English, what would you ask him? I'd say, "How's life Regal?" because it's pretty good.
Outside of ball playing, what does Regal like to do? Because he lives in Nantucket, he is on the boat to get back to the States. He's out on the boat, he runs the beach and they have a place down on Lake Como, New Jersey. He's very much an outdoors dog, he loves being outdoors. 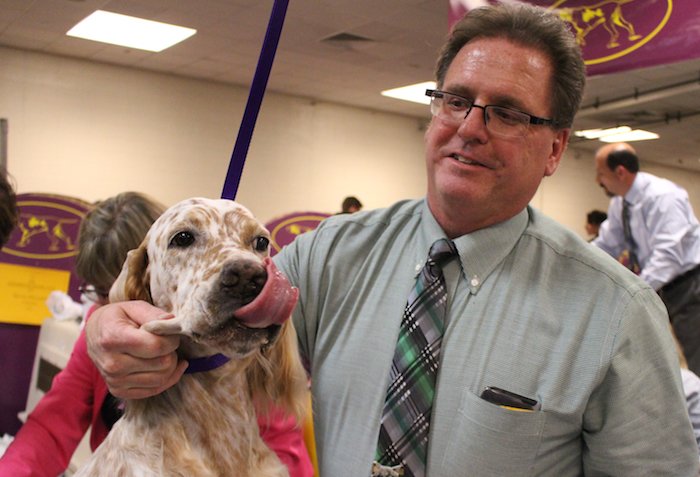 Show name: Grand Champion Country Squire Cotillion
Breed: Setter
What does Tilly like to do for fun? She has nieces and nephews that she likes to play with. Tug of War is her favorite.
How long have you two been showing together? Since she was six months old. She's six and a half years old [now].
If Tilly were able to speak English, what would you ask her? Is she having the time of her life? I think tonight she is! 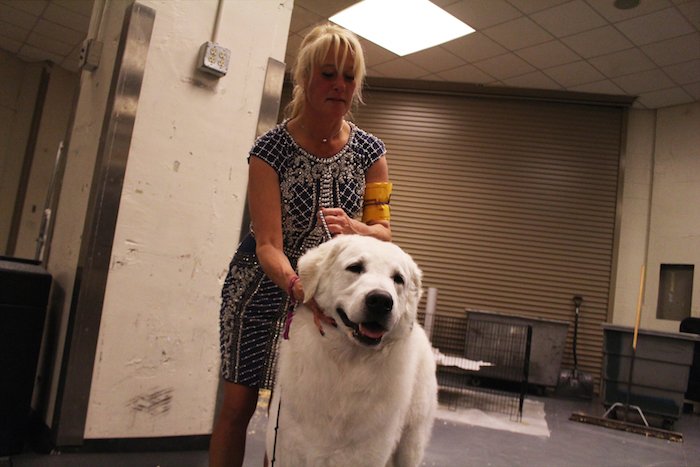 Show name: Casablanca's Vakmero Pandur
Breed: Kuvasz
How did he get his name? It's a Hungarian breed. I'm the handler and they name all their dogs Hungarian names to keep the trueness.
How long have you been showing together? Three years
Other than ribbons, what's the most rewarding part of showing? Just having him enjoy it and finding different ways to make sure he enjoys it.
What does he enjoy about shows? Different treats and playing and different ways of exercising. Seeing the ocean, parks, giving him a break. He loves people.
What does he like to do for fun? Chase birds.
If he could speak English, what would you ask him? What are you really thinking?
What do you think is one of the misconceptions about the dog show world? Probably that it's just a beauty pageant. It's really about the structure and the temperament about each given breed. 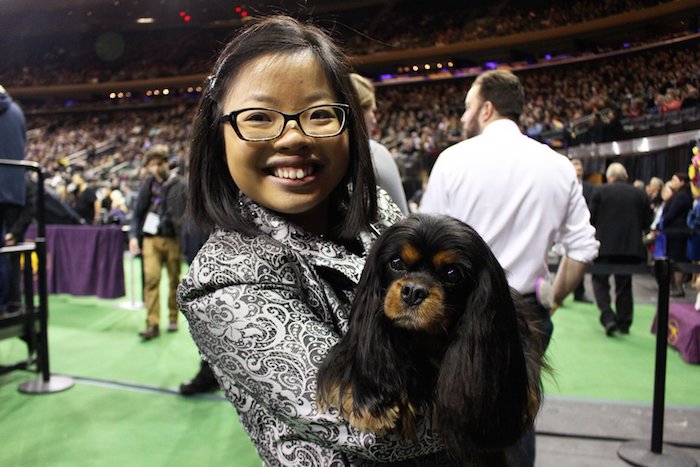 Show name: American Grand Champion, Canadian Champion Pensrick Ace Of Spades
Breed: Cavalier King Charles Spaniel
How long have you been showing together? Six months
Other than ribbons, what's the most rewarding part of showing? Being with your best friend ever single day.
What does Coco like to do for fun? Coco swims, she fetches sticks, does everything that dogs do.
If she could speak English, what would you ask her? What is it like to be her?
What do you think is one of the misconceptions about the dog show world? I would say that we only care about how they look. We care about the health, we care about everything because they’re are whole world. 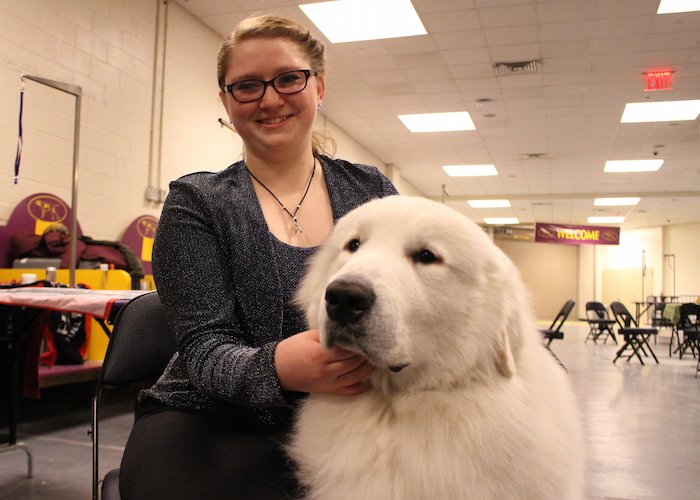 Show name: Grand Champion Thorn Hill's White Tie Affair
Breed: Great Pyrenees
Where does the name come from? That comes from his kennel.
Other than ribbons, what's the most rewarding part of showing? Having fun with your dog.
How long have you been showing together? Less than a year. He started March 2015. He’s really young. He’s turning two. He was the youngest one in his breed entry.
What does he like to do for fun? He likes to dance. He’s named for Fred Astaire. His breeder calls us Fred and Ginger and after a round, we dance.
If he could speak English, what would you ask him? Do you want to dance?
What do you think is one of the misconceptions about the dog show world? That the dogs aren’t enjoying it. Most of these show dogs have really good lives and a lot of people see it as them being forced to do something. He loves to do this. When we get ready for a show, you can tell he’s excited. I’m not forcing him to do anything. If he doesn’t want to do it, he’s not going to do it and I’m just going to have to deal with it.
What are his favorite foods? He likes chicken, he likes liver, he likes heart and he also likes tripe [aka] cow stomach. 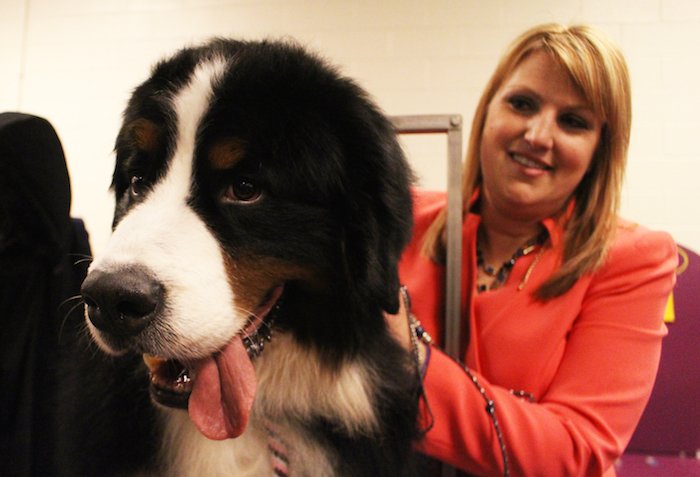 Show name: Avatars Smooth Criminal
Breed: Bernese Mountain Dog
How long have you been showing? Probably 20 years. My mother was a breeder before I was.
Other than ribbons, what's the most rewarding part of showing? Because I’m a breeder, to have a dog that you kind of created to do well in the ring is amazing.
What does he like to do for fun? He likes to play around out in the cold, suck on his blanket. That’s about it.
If he could speak English, what would you ask him? Why are you so goofy?
What are his favorite foods? He eats lamb and rice, but he loves liver and chicken.