“At 17 years old, I was clinically depressed. Then, I had discovered this love for making music…”

It’s hard to extinguish the fire burning inside of 26-year-old Nitty Scott. After being nearly trampled by some of life’s grueling challenges, she found a way to circumvent through her traumatic experiences and forge a lane for herself as a highly-touted independent artist. While innumerable acts struggled to slither their way through the concrete jungle that is New York City, Scott finessed her way through the underground with her scintillating wordplay. As she knifes her way through her mouth-watering arroz blanco con chuleta frita at the Bronx’s Spanish diner Cuchifritos, she begins ruminating on her complicated, yet beautiful struggle, as a Black and Puerto Rican emcee trying to capture her once-elusive rap dreams. 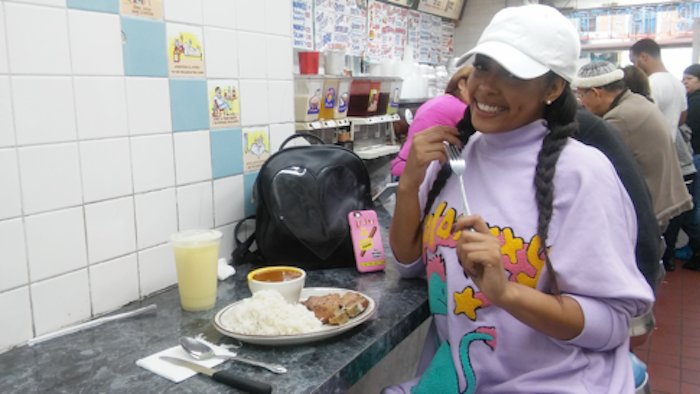 "I did poetry and spoken word. I was actually a creative writing major at my art school. I'm an art school kid,” she says. Sporting a long pink crewneck with an infectious smile to match, the bubbly rapper speaks with fervor about how she nearly took a different journey in life revolving around her love for writing.

“During all of the poetry and spoken word, I would do oration contests, speech contests, and I got a lot of awards and stuff for things of that nature. I was always part of the yearbook and newspaper staff. I was actually the Editor-in-Chief. I was going to go the journalism route. I would have gone to school for journalism and communications if I didn't do the rap thing."

While already showing early signs of being a dynamic writer, one Atlanta rapper solidified her admiration for music. For Nitty, it was a rousing verbal exhibition laid down by Andre 3000 on TLC's "Sumthin' Wicked This Way Comes." His poignant verse did enough to stir up her creative juices and helped her consider stepping into an ultra-competitive sport dominated by men.

"I gotta say it was probably when I was 12 or 13 living in my dad's house. I was listening to the TLC CrazySexyCool album and the last record on that album was kind of like an obscure kind of record. It wasn't a single or anything, but it was called something ‘Sumthin' Wicked This Way Comes’ featuring Andre 3000. He sets off the whole song with a verse and when I heard that verse, I just froze."