The husband and wife duo know how to bring the heat to the stage.

When a band is comprised of only two people, things can be either really complicated or really simple. LA's KOLARS likes to do a bit of both.

The basic structure of a vocalist/guitarist and a drummer can work wonders for simplistic songwriting, but most of those duos don't contain any tap dancing. That's where KOLARS break the mold, as drummer Lauren Brown prefers to play their neo-retro tunes with her feet rather than her hand.

Myspace caught up with KOLARS before they took the stage at the Echo Park Rising festival to learn about who inspires them and the importance of originality. 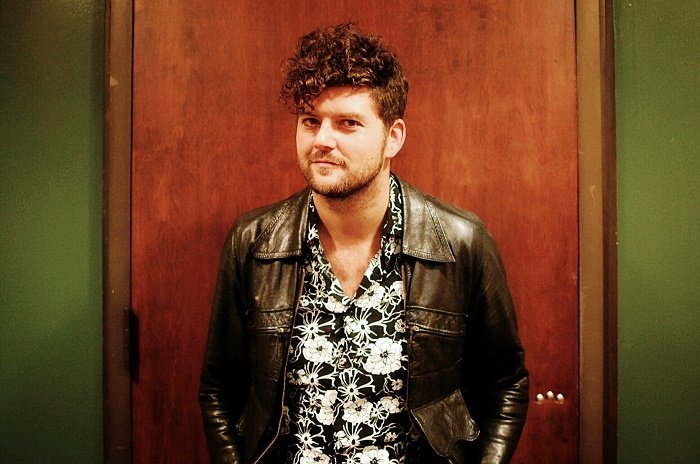 Age: Mentally 15
Instrument: Guitar and vocals
Song or Band That Inspired You to Become a Musician: For me, it’s a mix. I’ve been incorporating sounds from newer bands like Ratatat or Gorillaz. From a production sense, I’m into Gnarls Barkley and I like a lot of what Danger Mouse does sonically in the studio. I’m trying to find middle ground between that and older T-Rex glam rock from the ‘70s like Bo Diddley or blues musician Howlin’ Wolf. Eddie and the Hotrods, The Cars — Cyndi Lauper and Prince even — punk and post-punk new wave artists that started using synthesizers and blended sounds and genres.
Favorite Song to Perform Live: Our sets are kind of like two different chapters. The first chapter is more of a stripped down guitar, vocal and drum set which we end with “Mystery Train.” For the second portion we bring in tracks that we created in the studio, like pre-recorded bass, keyboards and percussion that we play with before ending that set with “One More Thrill.” They’re also the highest energy moments of the sets, and by the end of it we’re pouring sweat.
Dream Collaboration: I’ve always wanted to collaborate with Snoop Dogg. I think he’s a fucking incredible rapper and I love his sound. We’re so different, but I think if you were to put his voice rapping over a cool rock-bluesy riff and a good fucking beat — I don’t know. I think it could be great. Who knows? It might happen one day.
On Maintaining Originality: It’s basically just following your instinct. You don’t want to think too much about “What’s going to make me successful?” or “What’s going to get me paid?” or “What’s going to get me on the radio?” I do believe artists who last are doing something that feels very genuine to themselves, and they’re always constantly exploring. You take risks, you take chances and just enjoy it. Instead of doing it for the wrong reasons — well, you could argue what the right reasons are — do it just because you want to express yourself and share that experience with people, because you want to create art that moves people and maybe even changes their perception.
Guilty Pleasure: I captain a roller hockey team. I’m really into hockey and it keeps my beer gut that I get from touring down. I’m really into the Premier League English soccer. I play soccer, but I also play FIFA. I do a bit of cooking, too. 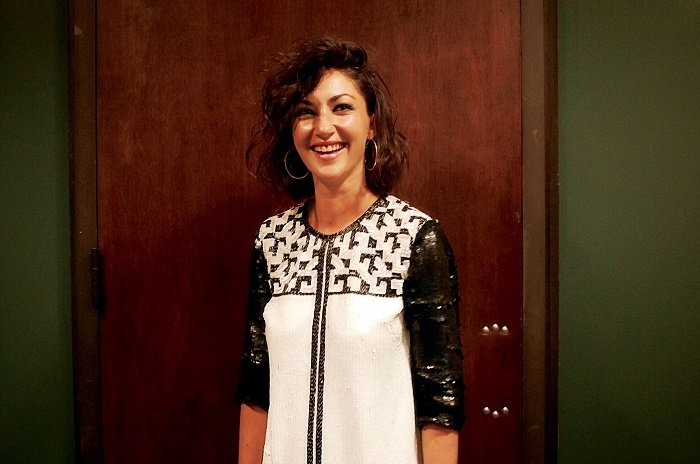 Age: 33
Instrument: Tap dancing drummer
Song or Band That Inspired You to Become a Musician: We were just listening to one of my favorite bands, Creedence Clearwater Revival before we came out tonight. I love them. I started listening to them in middle school. It was rock ‘n roll and blues, but it’s also kind of dirty and raunchy. It’s also simple, and I can dance to it. I think that opened up my mind to music in general. I was in a dance company and dancing to things that weren’t expected or super poppy. Old Tina Turner: my favorite of all time. She was a performer, singer and dancer.
Favorite Song to Perform Live: I much prefer playing live. Recording makes me so nervous because you’re almost hyper-aware of every beat and where it’s landing. But in live performances, you’re vibing off of the crowd. You’re vibing off of the energy and the air where you’re at, so it becomes sort of like a spiritual experience. You become less hyper-aware of where things are. We do some acoustic-y songs and also some songs with tracks that feel more full. Acoustic-wise, we do a cover of Elvis Presley's “Mystery Train,” and I love that song. Out of our songs, “One More Thrill” is my favorite because it feels sort of nasty.
Dream Collaboration: Sheila E. and I side-by-side, drumming together. That would be kind of fun! Or maybe a tap artist, like Savion Glover or Johnnie Hobbs, who’s my tap dance teacher here in Los Angeles. Just being able to riff off each other while I’m playing my drums at the same time would be the best.
On Maintaining Originality: I agree with Rob, and it’s really hard to do that. Every day we grapple with it because you think “Oh, I want this to pay my bills,” and you’re trying to not let that be the focus. There is no expectation, and there’s no outcome that I want to put on it. I feel that the more that I focus on that stuff, the more untrue I am to myself. The same goes for clothing or anything. You shouldn’t care what other people think and what the outcome is supposed to be, but just what you enjoy.
Guilty Pleasure: Eating is my favorite thing to do in the whole world. We both like to travel. We just came back from Turkey and Egypt and that was an amazing journey. I love television, film, and theater. I have IMDB brain.