Dan Clermont points across a crowded table at one of the many TVs showing college football on the walls of LA's Big Wangs.

"Dude, they just played our song!"

It takes a minute for the rest of Set It Off to realize what their lead guitarist is talking about. Vocalist Cody Carson turns around to look at the television while drummer Maxx Danziger looks up from his plate full of boneless wings to see what Clermont is talking about. The three of them along with bassist/rhythm guitarist Zach DeWall start celebrating as if their preferred team (the band is split among a few different NFL franchises) just scored a game-winning touchdown.

To the rest of the sports bar, it looks like the table full of young guys is celebrating a break in the action of an early-season football game between two relatively non-contending teams. There's no sound coming from the TV, making those who heard the discussion over the musical source of excitement even more confused. During the buildup to the release of Set It Off's third album, Upside Down, the band was told exactly where and when their song "Uncontainable" would be played during which college football broadcasts, so the avid football fans don't need to hear the track to know exactly when it's on.

"That's so cool," Carson finally says. "That was really big for us." 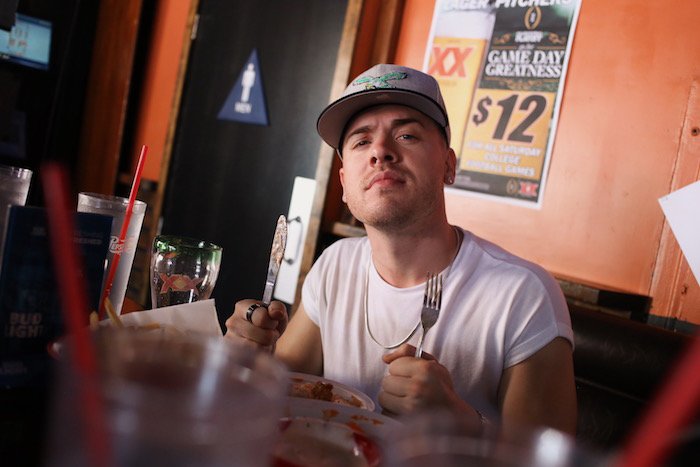 But while having a song on TV might be the excitement of the moment, it's just a drop in the bucket of Set It Off's year. The band spent all summer playing their second consecutive Warped Tour, and then promptly went on the road once again for a fall tour. Among all of their live shows, the quartet still managed to find the time to put the finishing touches on Upside Down. Now that they're established veterans of the music industry, Carson and company get to be the ones calling the shots when it comes down to making a record — particularly since they're no longer trying to fit into any sort of subgenre.

"Upside Down is a really eclectic journey of us diving headfirst into what we've always wanted to do, which is just be free to write whatever music we want to write," Carson says between bites of tremendous boneless wings slathered in buffalo sauce. "Right now, we're focused on writing the best songs possible rather than trying to write in a specific niche or a specific song. It felt so forced, honestly."

Although synthesizers, samples, pop rock might not go together in the eyes and ears of some bands, it works as well as boneless wings and french fries for Set It Off. The group that started as a simple synth-loving pop punk band has evolved into a much more intricate and complex sound, featuring different textures and tones on just about every track. Sure, their original pop punk influences are still there, but no one in the band is concerned about cashing in on pop punk's recent revival — or even playing a trendy type of music, for that matter. 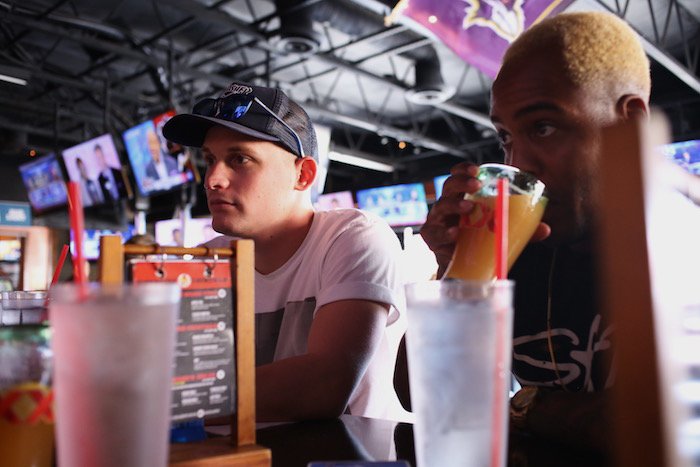 "I feel like we were always a little too soon or too late on a lot of the trends," Clermont says as he sips his golden hefeweizen. "We started as pop punk when no one wanted to do pop punk. Then we went away from that and went a little more post-hardcore, and now that is becoming more popular as we're separating ourselves from it. It's still cool to see pop punk back because so many of the bands that were the soundtrack to high school for us."

"It's funny, because we used to get made fun of for playing pop punk," DeWall adds as he nibbles on a spicy garlic wing. "But now when we put out new music, people are like 'You should play the old stuff!'"

As Carson sees it, the band's multi-genre past is a large part of the reason an album like Upside Down exists. If they hadn't been teased for playing pop punk or if people had really dug their slightly heavier sound, Set It Off may never have gotten to the point where they decided to make the music they enjoyed rather than attempting to cater to as many fans as possible.

And yes, for those Netflix aficionados out there, the band that released a record called Upside Down has enjoyed all eight episodes of Stranger Things. For them, it's a happy coincidence — even if they announced their album just weeks before the entire nation became obsessed with the Demogorgon's homeland.

"We all loved Stranger Things, so it was perfect," Danziger says between handfuls of gravy-covered disco fries. "We even posted our album cover upside down in the Upside Down."

"We were binge-watching it together on tour, and as soon as they started calling it 'the Upside Down' we knew it was incredible," Carson adds. "We got so excited about it. They're obviously huge fans."

"The biggest joke we get right now is that we should call the next album 'Rightside Up,'" Clermont says.

"Maybe we should do that just to fuck with them," Carson responds.