Brooklyn’s best-kept secret is on his way to becoming your favorite emcee. 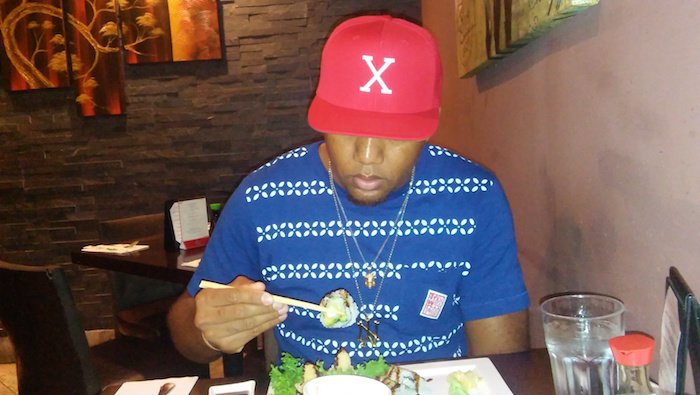 It's a balmy September afternoon in New York City, where pedestrians are feverishly scurrying to their destinations after a long day of work. While going home is on the mind of millions of New Yorkers, food is also on our minds.

The quaint Asian restaurant that is nestled between a bevy of Irish Pubs on 35th Street is where we meet up with Brooklyn rapper, Skyzoo. Donning his red fitted and blue t-shirt, Sky appears comfortable, and ready to dish out some gems. Like Sky, Asura is wrapped in richness and decadence. Inside the plush restaurant, you find several cooks meticulously chopping up sushi with seamless precision. A spoonful of their pineapple fried rice will make anyone instantly gush and ooze with happiness.

While indulging on his Crab Rangoon and Chicken Tempura, the 33-year-old lyricist begins ruminating on his younger years. "I had young parents — my parents had me when they were 20 — so when I was six, they were 26. When I was 7, they were 27. So they were young. All they were listening to was [hip-hop] because they were still young and in the streets." Fortunately for Sky, his parents' eclectic taste in music was damn near impeccable. An array of artists ranging from De La Soul, A Tribe Called Quest, N.W.A. and Public Enemy were booming through his speakers. Still, it was a younger emcee who grabbed his ears when he was inching towards his rap dreams.

"I started rhyming because of Chi-Ali. That was '91. So I was nine years old. Chi-Ali was this 15-year-old kid who came out, and he looked like the guys in my building. He looked like the guys in my lobby. So when I was eight or nine years old going to school, you saw the 14-, 15-, 16 year-olds in the lobby tagging the walls, blowing bud, chilling and messing with the girls. So for Chi, it wasn't like he was young like Kriss-Kross, or like 20 something like Black Sheep and all of them where I felt like I couldn't relate. There was a cool middle ground. It was like he was older than me so I can look up to him, but he was young enough for me to relate to him. That's what did it for me, man. I heard Chi's ‘Age Ain't Nothing But a Number’ and I was done. Immediately, I said this is what I want to do."

From there, Sky pounced on his rap dreams like a ravenous lion ready to strike its prey. He sharpened his blade of lyricism and polished his delivery. The swagger and bravado was already burning a hole in his pocket. He had the juice. Initially, his dad wasn't a believer. Like every concerned parent, he preached the value of stability and education. He wanted his son to eclipse every expectation placed upon him with his knowledge of wealth and not just with his gift of gab.

"It took [a while for] my pops to get onboard with it only because he wanted what was best for me. So his heart was in the right place where he would look at me and be like, Look man. You can't put your eggs in this basket," says Skyzoo.

Fast forward to 2016, and Skyzoo is one of hip-hop's most groomed lyricists. After flawlessly etching together three solo albums with his last coming in 2015 in Music with Friends, he teamed up with one of hip-hop's best kept secrets in Apollo Brown for their newest endeavor, titled The Easy Truth.

Brown's spine-chilling samples bristled with Sky's poignant wordplay ability was a match-making in heaven. With the release of several singles including "One of the Same" and his Joell Ortiz-assisted "A Couple of Dollars", hip-hop aficionados smiled cheek to cheek.  Despite recording the entire album in Detroit, Sky impeccably used his paintbrush to flesh out his childhood in the grimy streets of Brooklyn, the home of the greats including Jay Z and The Notorious B.I.G.

“With [Biggie’s] Ready to Die, I was there for that. I was the little kid going around playing ball, going to the store, getting iceys, going to the chicken spot and splitting a hero with my friends. I was the little kid doing that when B.I.G. was living everything that was on Ready to Die. Records like ‘Everyday Struggle’ and ‘Warning’ were records that he was living and we were there in the neighborhood. With Apollo, I was able to capture my memories as a kid and bring that out on this new album.

"I love being pushed and being creatively pushed to that point of no return," adds Sky. "Apollo pushed me to places he wanted to see me go on this project, and I pushed him. It was a team effort. I know the people are going to love it."